Punk Rock Bingo - The BEST night out in Calgary. 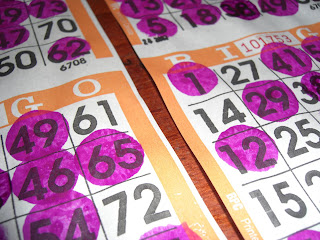 Tuesday nights at the Ship & Anchor, 17th Ave, Calgary from 8pm
Punk Rock Bingo - the best night out in Calgary for sure and something that I feel the rest of the world should start adopting. Perhaps I will bring the sensation to Chicago....
What is Punk Rock Bingo I hear you say?
Well, it used to take place on a Tuesday night at Broken City run by a guy called Steve.... Steve then left and took Punk Rock Bingo with him the the Ship & Anchor on 17th Ave. Punk Rock Bingo (or PRB) still continues at Broken City but it isn't as good without Steve. (sorry new guy but it's true)
It's kind of like normal bingo but instead of Grannies and the retired, it's mostly a young, "alternative" crowd. Instead of silence and ultimate concentration, it's yelling, boisterous and the odd swear word. Instead of winning $10 at the bingo hall, there is a random selection of prizes ranging from ice skates, to board games, to tattoo sessions, to wrestling masks, that Steve runs around town blagging from local stores and the odd flea market. Instead of tea, it's beer and wings. What's not to love? 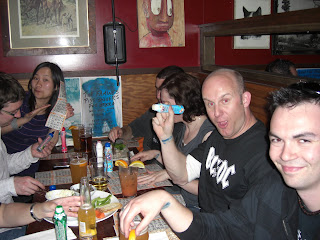 Started by JJ, there's a crowd of us that would go regularly. A nice early week break in the evening. I and some of my fellow ladies, seem to get possessed and turn from quiet, well behaved young ladies, into screaming, yelling hooligans (in a good way), for a couple of hours. It's brilliant.
You have 3 rounds per Bingo, ending in Blackout Bingo (getting the whole card), there is also the Kite Round, and the X round, all with associated hand signals that will earn you a beer if you are the first to do it. The bingo is also interspersed with random rounds of Rock, Paper, Scissors, head banging competitions, and the odd trivia round. This is where I finally won a prize. The question was "Where were the last winter Olympics held?", pretty sure that I knocked a table over and maybe elbowed someone in the face in my haste to get to the stage with my answer. My reward? A guy in the crowd had donated a AssOlympic calendar that he had created for charity, consisting of him doing various Olympic sports, ass naked. WIN.
Brilliant night out and well worth going to. Below are some other blog entries from my fellow PRB goers.
Andree Lau's Blog - http://ugonnaeatthat.com/2009/04/17/calgary-wing-night-punk-rock-bingo/
John Johnston's Blog - http://ateabutnoe.com/?p=227
Suzi Edward's Blog - http://binkysilhouette.blogspot.com/2009/05/punk-rock-bingo.html 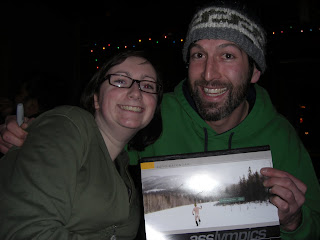 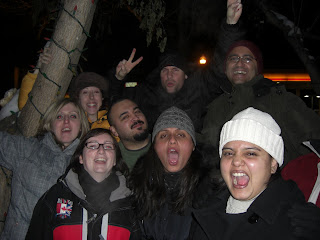 Last year I went to one of the World Cup downhill skiing runs and had a brilliant time. So I managed to persuade Tim to come with me for a weekend in the mountains this year. It was the first time we'd attempted to go skiing together, so I was quite nervous and excited!

It was US Thanksgiving weekend so I had the luxury of having Tim in Calgary for 5 whole days. It was a particularly wet snowy evening when we set off, seemed that Calgary was caught unawares so the roads hadn't been treated and were particularly treacherous. It took us a massive 2 hours to get to COP, a trip that normally takes 20 mins, at which point I drove up the on ramp to get onto the Trans Canada highway which goes to Banff, as I drove up the sheet of ice that was supposed to be a road, everyone started sliding backwards including me, most scared ever been, thankfully having a Canadian sitting next to me who knows what to do helped, and as everyone else was stuck too, they all got out and helped push each one of us up the road. Some crazy stupid drivers out there.

Thankfully the snow hadn't fallen past the outskirts of Calgary and the road to Banff was completely dry. We made it to our hotel and I was defiantly thinking that I had deserved a bottle of wine.

We made reservations at The Bison, on Bear St in Banff. We had had brunch there when we met up with Tim's sister in the summer and were really impressed and also had heard rave reviews from some of our friends, so were looking forward to having dinner there.
The atmosphere was nice and there are some interesting things on the menu, we had an unusual bottle of wine called Boom Boom! (admittedly we picked it purely because of the name) accompanied by a meat and cheese platter full of bison meat, duck, venison and wild boar. Yum. Highly recommend it to anyone wanting a nice meal in Banff, slightly elevated tourist prices but worth it I reckon. 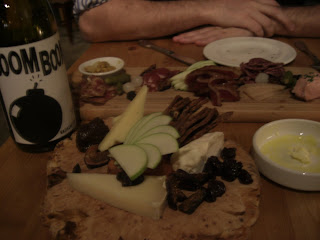 The next day we headed to Lake Louise, we got Tim all geared up for his first ski in 15 years or something. I always love the atmosphere at the races. It's free to go and watch so if you don't want to ski and just watch the racing in the finish area that's perfectly acceptable. They have free hot cider and cookies and a marshmallow roasting fire pits. They also give out wee cow bells, meaning that all the racers get a rapturous reception as they cross the finish line. A great positive energy, and it's fun spotting all the "famous" racers ;-)

We then went for a bit of a ski, and credit to Tim he was pretty receptive to his ski instructing girlfriend trying to help him. heehee. 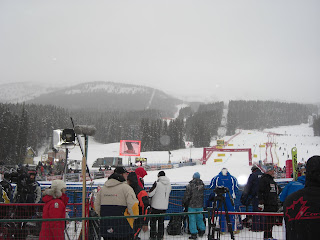 Posted by Anne Simmons at 9:48 AM No comments: