We've all been pretty busy with work, long days and lots of hardwork. Will all be worth it i'm sure...
I have just over a week left in Bangalore now, definitly on the home straight... now though I start worrying about finding somewhere to live in London. I have a week in a hotel once I get back to find somewhere in, but still pretty scary! 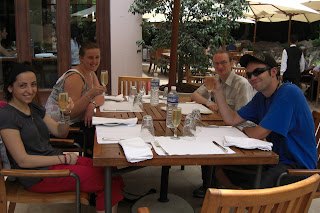 For the last week the classes have been split, so the developers have been getting deep into developement whilst the analysts do their analyst thing. My confidence in my coding ability has been growing very slowly but at least is growing. I often feel like i'm the only one for whom most of this stuff is completly new, and my brain is starting to hurt with such a fast ramp up! Tomorrow we will be doing a little mini project, where hopefully it will all start to make sense when i see how everything interacts in context, will also be following all Agile practices whilst onthe project so we shall have to see how well that turns out! 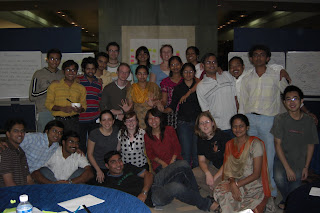 Then next week is the week long project simulation, where all 27 of us will be on one team attempting to create a Facebook type networking site..... yeh slightly worried about how that will all work out, as long as everyone is professional about it and puts in 110 % perhaps we'll be ok, but somehow I doubt that will happen! Will i be brave enough to volunteer to be a manager for a day????

I've also moved flats, I have a serious leaking ceiling problem in my original flat so now am happily living with Val (one of my wonderfull fellow London office buddies!). All going well apart from the fight I had with a mosquito one night and am still suffering from, stupid swollen foot!

Am hidingin my room this evening attempting to catch up with emails, sorting out london, car insurance... and Dads upcoming 60th birthday on sunday, which i'm sad not to be around for, but shall catch up soon.

As we start to think about returning to London, I hope to get onto a project as soon as I can so I can put all this new knowledge into practice, but with the current business situation it either means I won't be able to get onto a project for a while and will spend time teaching myslef new things or with a bit of luck i'll manage to get on a project in Canada over the winter so I can go skiing every weekend!! Stay posted!! 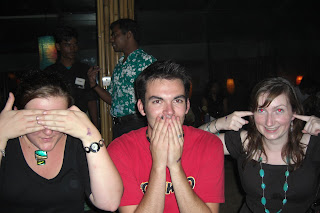 Oh yeh had a good night out the other night. For some bizarre reason two weeks before we arrived in Bangalore they decided to ban dancing in places where there is alchohol served, or music playing or something, any resulting in no dancing anywhere.. or so we thought. We'd heard a few horror stories about police raids and the such so hadn't braved going out up until now. But last saturday night we decided to treck to The Beach, which is a bar full of sand... and proceeded to dance the night away, made even more fun by how illegal we were being! Still wierd though everywhere shuts at 11.30pm, which feels particularly wierd when you stumble out of a bar feeling like its 3am and its totally not!


Anyways thats me for now, laters
Posted by AnneSimmons at 8:22 AM No comments: