Finding The Strengths in Your Team 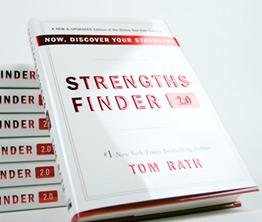 (This picture is taken from their website linked above)
I rolled off my previous engagement with ThoughtWorks in mid-August. I had a brilliant time on that team, which felt like one of the most well bonded team that I, and many others have come across in a while. (admittedly biased). We had gelled well and were pretty productive, but I think that we all also learned a great deal about ourselves and grew enormously throughout the 9 months we were together. On paper we were a pretty mixed bunch of people but I guess we all had a similar goal of work hard, deliver great software to our client and have fun doing it. I could harp on forever about some of the things that we took away from the project but I want to focus on a tool that really helped us work better together.
One of the exercises that we did do as a team was take the Strengths Finder test. Some co-workers had mentioned that they had done it and thought it was great and so one by one each of us gave it a go. At the time also I had started pairing more frequently with one of the others on the dev team, we were also down to 3 people now making pairing that bit harder. The two of us felt like we were worlds apart in our approach and were admittedly driving each other crazy with our dysfunctional pairing. One of the things that really helped was the results of the strengths finder test, once we understood where each others strengths were and where they were coming from it all suddenly seemed to make sense and we've since (through a lot of hard work and honest conversation) become very effective pairing partners and awesome friends.
How does it work?
This book summarizes that as a world we spend far too much time focusing on our own (and other peoples) shortcomings that we are seriously limiting out own growth. "What's more we had discovered that people have several times more potential for growth when they invest energy in developing their strengths instead of correcting their deficiencies". While I don't believe that you should stop working on your weaknesses, this is a great theory.
You have to buy the book (see below) and you get a code that you can take their online test with. You rate a hundred or so questions on how much you agree with the statement, and the strengths finder then comes out with your top 5 strengths, and a personalized action plan, among many other things. There are a total of 34 different themes. You can get a lot out of reading the whole book, but you can also get what you need by taking the test and referring to the sections that apply.
What did the results show?
Well these were my top 5....
Empathy
Harmony
Arranger
Responsibility
Restorative
Go figure. I suppose those of you that know me won't be too surprised. Initially I was annoyed at how "fluffy" my strengths were, and was jealous that I didn't have things like Maximizer or Woo (self deprecation is my number one weakness...), but my team mates (and the book) helped me realize that I am lucky to have these strengths, that don't come as easily to a lot of people.
There is a chapter on each strength, there is a description, examples on things that a person which this strength might say or do, some ideas for action, and in my opinion, the most useful three bullet points of them all, "Working with others who have X". By each of us reading about how to work with the strengths that the rest of the team our understanding of each other went up exponentially. This is an extract of the "Working with Others who have" section from one of my strengths, "Responsibility", it certainly explains a lot...
This is just one example of the great things this book has to offer. It really helped out team and I help that it can help yours too. Or just for some self reflection.
I have also included a chart that shows all the different strengths across our small team. Quite a mixed bunch, but we almost all shared at least one strength with someone else, which I think is what really helped us gel and gave us such a rounded team.

Posted by Anne Simmons at 1:21 PM No comments:

During the last week of August Tim and I ventured back to Canada for what felt like a well earned week long vacation. The project that I was on at work since coming to Chicago had just finished and I was definitely in need of a break. In classic Anne and Tim vacation style, it involved lots of flying, good friends and hanging out with family. But this time it was Tim's!

We spent the first weekend in Edmonton, attending one of Tim's university friend's weddings. Theres a pretty large group of them that have been friends since collage and still meet up at each others weddings. They're a nice crowd and have been pretty friendly to me as the newcomer to the bunch. Some of them I've met a few times now and so that made it easier :-S. It was a lovely wedding and it was nice wandering round Edmonton seeing all the places that Tim used to hang out and work in during University and for a year or two afterwards. It was also blissfully cold in comparison to the boiling Chicago summer that we had been having. 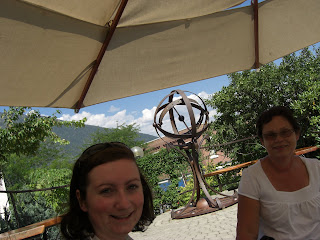 Next stop was Nelson, which is in British Colombia where Tim's sister and parents are now living. To get there we had to fly Edmonton to Vancouver (which looks lovely must actually go there one time...), and then take a little plane to Castlegar which is in the heart of the southern BC Canadian Rockies. Tim's parents picked us up and then took us back to his sister Kim's gorgeous house. Kim and her Yorkshire husband Wes moved to Nelson from Alberta and picked an amazing spot. They have done their house up themselves (helps that Wes is an electrician) from what sounded like a dump initially, and now have a 3 story house with a wrap around deck, and a self contained basement that Tim's folks now live in. Tim's mum has done an amazing job on the garden which has a massive veg patch and loads of fruit trees, which, as this is serious bear country, get ravaged every night, much to their annoyance. 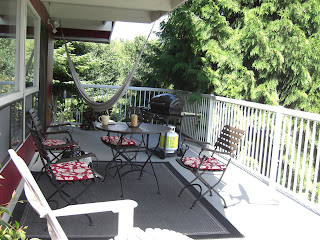 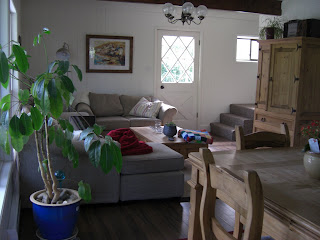 The house is located just up and across the road from the West Arm of the Kootenay Lake, a huge freshwater lake that runs down the middle of this part of the Rockies. They have an enviously slow paced, outdoorsy life. You can't help but be relaxed the minute that you get there. I could of quite happily stayed. Tim and I spent most of the week lying in the hammock on the deck, enjoying the sun and reading books. Fantastically self indulgent. We also ventured into Nelson itself to see the Farmer's Market, which turned into marvelling at how Nelson seems to have an awful lot of Hippies per square inch, possibly only challenged by Glastonbury Festival. As there have been lots of bears this summer Tim and I were too chicken to go out hiking, which would of been fun, but actually relaxing, and admittedly napping for an hour or two every day, seemed like a pretty good alternative. We also managed to go Kayaking one morning too. It was super hot while we were there so we dragged ourselves out of bed early enough that it was still cool. It was pretty windy and the lake was pretty choppy, I loved it, made me think I was at sea, Tim, not so much! 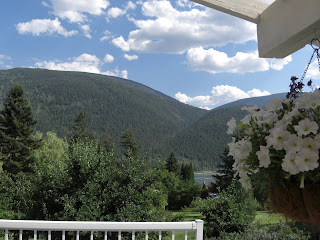 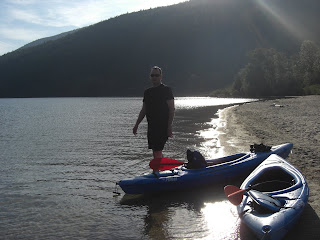 Tim's Mum also mothered us well, it was lovely to have some "mum cooking". It was really great getting to see Tim's family. He hasn't seen them much for a few years so it was good to just hang out. Wes and I had a lovely time bantering over the north/south English divide, and Kim and I are frighteningly similar despite the 12 or so years between us. It was just what we both needed.

Next stop was Calgary for the final weekend. I desperately wanted to catch up with old friends there on our way home. We had a pub night in my honour (hurrah!), organised by the awesome Miss Patricia, and a great turnout, it was amazing to see you all, I miss you all very much. It felt like a long long time ago that I lived there, despite the fact that it's only been 9 months. Lot's of life changes in that time I guess! Talking of which we had a great time catching up with the newly Canadianified JJ and his gorgeous fiancee Sara, seeing their new pad, eating at the Farm and catching up with Sara's little critters. Also the soon to be parents Jason and Andree (they had their gorgeous little boy just a few days after we left).

A lovely week away and great to see so many friends.
Posted by Anne Simmons at 9:28 PM No comments: